After quite some agonizing our country recently decided to recognise one of the central tenets of a modern, civilized society, that being not to discriminate against people for no reason at all, and legalised same sex marriage (SSM). This marvelous leap forward was somehow achieved despite the concerted efforts of my eldest son.

Some weeks ago, while the voluntary, not-at-all legally binding, postal survey/ plebiscite/ pulse-check/ focus group, still appeared to hang in the balance, Milo and I took a stroll down Lonsdale Street in Canberra. Lonsdale Street must surely count among the most SSM supportive locales in Canberra, and therefore the nation. It has a roundabout at its midpoint which is painted in a dramatic rainbow swirl, rainbow streamers flutter from the light poles, frozen yoghurt is served with complimentary rainbow sprinkles, dogs are painted in rainbow colours and those dogs that happen to be boys merrily chase other boy dogs with no fear of judgement or retribution. I believe that day there may even have been a rainbow in the sky, following a little afternoon drizzle. In short, Lonsdale Street had been forsaken by the ‘no’ campaign.

As we strolled the wide, progressive, forward-leaning, tolerant footpath on our way to a cafe for a ‘treat’ (we were waiting for 4 new tyres to be fitted to our car, because Lonsdale Street is one of those rare and exciting streets along which one can purchase 17″ radials and vegan pancakes) we happened upon a large rainbow sandwich board with YES written upon it in bold, capitalised font. “What does that rainbow mean daddy?” came the question from my charming, inquisitive son.

Now, Milo already had some background on this matter, and likely already knew most of the answer; he had previously attended a same-sex-marriage rally, happily draping himself in rainbow streamers, chanting slogans of tolerance and equality, and generally being a cute, apparently reasonable young citizen.

I thought “what a sweet question, why don’t I take the opportunity to nourish my child, expand his awareness of social issues, treat him like the grown-up sentient young man that he is, build upon the already comfortable, excellent and ongoing dialogue in which we regularly engage on whatever topic his little mind meanders its way to”. I thought it would also be a wonderful opportunity to demonstrate what a thoughtful, articulate and clever young 3 year old I had raised to the numerous, bustling passers-by, on their way to further their enlightened social agendas.

We stopped, hand-in-hand, by the sandwich board, with the rainbow just peeking through the clearing clouds above, and I said “well Milo, this sign is encouraging people to vote yes to allow boys to marry boys and girls to marry girls if they want to. Isn’t that an excellent idea? What do you think?” Pleased with myself, I stepped back and awaited Milo’s adorable answer; I noted a slight smile on the face of a passing lady in her mid 30s wearing semi-formal attire, enjoying this simple moment between a father and his son.

“I want to vote no” said Milo.

“What?” I replied, with more desperation in my voice than you should allow when conversing with a 3 year old. “What do you mean?” I said with a slightly self-conscious giggle, immediately conscious of the numerous enthusiastic ‘yes’ voters who were most definitely within ear-shot.

“I want to marry mummy, not daddy”

“Well…” I said, with parental maturity and control “that might be your opinion but the point of the vote is to allow everybody the opportunity to choose to marry whom they want, do you understand the difference?”

I was pleased with my response; surely the passers-by would see that ours was a house in which important issues were discussed and debated, where opinions were heard and respected. Not one in which rainbow flags are burned, and sky-writers paid to emblazon “NO” across the sky.

“I want to vote no, and I want to marry mummy not daddy”. Milo was now enjoying the sport, and this was not good for me; I was certainly losing control, and people were becoming interested in our conversation.

Things got a little more hostile.

“Well mate, frankly if you want to marry your mum it’s going to take more than a non-binding postal survey to change the constitution, and anyway you’re too young to vote, let’s keep moving.”

In order to flee the scene I firmly (but gently) pushed the back of his socially conservative head in the direction of the cafe. He was grinning.

In my haste to get off the street we stumbled into a vegan cafe. The child had been promised banana bread, so I leaned down to peer through the window box in a desperate search for a vegan substitute before he had a chance to say anything else mortifying.

While my back was turned Milo was perusing the room. Not unexpectedly it was liberally decked out in rainbows of all colours, sizes and sexual orientations.

“I want to vote no” he said, loudly. Really, very loudly. In quite a small cafe.

The percentage of patrons (which numbered in the teens) who did not hear Milo’s comment was surely zero. A hush descended on the group which had been, until our arrival, happily enjoying all manner of milk substitutes. All eyes shuffled swiftly, and judgmentally in my direction. Nobody was looking at the little knee-high neo-conservative looking up at me with his challenging eyes and maniacal grin. Why would they? How could a 3 year old possibly have adopted such last-century views without clear direction and guidance around the breakfast table.

I thought about engaging Milo in the same manner I had on the street, but with those wounds fresh, I thought better of it and instead decided to make our purchase, retreat to the rainbow roundabout and never return. I ordered a ‘vegan dessert kebab’ and a ‘cafe latte’ and then sought to distract my child by pointing out things in the window that looked like chocolate. As I bent down toward Milo the noticeably unimpressed barista asked me what type of milk I wanted. My brain, straining under supreme cognitive load, decided not to process this question and instead replied with its reptilian lobe;

“Do you mean cow’s milk?” she asked, with a slight lowering of her eyelids, and a curling of her lip.

I stood up straight, my eyes quickly traversing every unimpressed face in the room as I swung them around toward the barista. “Um, yes please”. No response, only a return to activity at the coffee machine.

The kebab and coffee appeared mercifully quickly. I tucked the kebab under one arm, scooped up my recalcitrant child with the other and backed awkwardly and noisily out of the cafe. The last thing those patrons would have heard as we stumbled our way back onto the street was “daddy, do you know I want to marry mummy, not you?”; at an ever-diminishing volume as we dashed haphazardly toward the relative anonymity of the tyre yard… 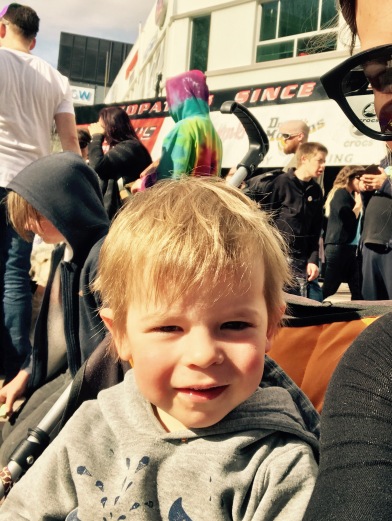 At the SSM rally – a wolf in sheep’s clothing…