Milo takes pointing very seriously. Over the last week or so he has learned this skill and now demonstrates it at every opportunity, whether he thinks others are watching or not.

In his repertoire he has; a casual bent arm semi-extended point with curled crab-claw hand, known as ‘The Murali’, a laser straight-arm, full legal extension elbow, rigid thrusting finger with deliberate trajectory, known as ‘The Inquisitor’, an elevated shoulder, perpendicular elbow, locked wrist, upward-pointing straight finger with officious sideways pendulum, known as ‘The Mutombo’,  and an indecisive, wandering, semi-locked elbow, with tilted wrist and pistol shaped hand construction, known as ‘The Tupac’. Milo is also an ambi-pointer.

All techniques will be seen on any given day, often with multiple examples of each. Milo usually executes the Murali to draw his parents’ attention to nothing in particular. He maintains eye contact and directs his crab claw in a deliberately non-committal fashion as if to say “Father, I have seen something in that direction. Is that something you or I should be interested in? If so let us go and examine it together.”

‘The Inquisitor’ is reserved for birds, planes, digital displays in lifts and grannies on the street. When executing this style Milo’s eyes will be locked on the item that is being aggressively examined, his little index finger reaching out with urgency, his face emotionless and professional. The Inquisitor is serious and absolutely requires acknowledgement from whomever is with him. Thus, one needs to quickly establish what worthy item has been identified and vocalise its significance, “sulphur-crested cockatoo” or “Airbus A380”, for example. This confirmation is sometimes difficult as Milo seems to be able to spot speck-like aircraft in the sky as if he were using Whitey’s spectacles in the film ‘Me, myself and Irene’.

Most often a small bird or swaying branch can be found at the business end of his finger but every so often we will be walking happily on the footpath, Milo’s eyes will lower, the finger of truth will be unfurled emphatically in the direction of something over my shoulder. I will turn happily to identify the item of interest only to find a person walking close behind me, or standing waiting at the traffic lights, staring back at my child. This person, for some reason most regularly a senior citizen, will usually seek to engage Milo in a friendly way. Milo, most often a child free with his smiles, is in ‘Inquisitor’ mode and so will offer no smile, smirk, grin or friendly response of any kind. He will only continue to stare and point until the person moves away out of his eye-line, leaving me to apologise or offer some limp explanation for my son’s unusual behaviour.

‘The Mutombo’ is usually executed when Milo is playing quietly with the Elefun Party Popper, or when dancing with his mum. It has also been seen indicating Milo’s delight at a morsel of lamb he has received.

Finally, ‘The Tupac’ can most readily be seen early in the evening while Milo is settling himself, or very soon after he awakes. It is an absent-minded point with no clear objective, performed by a tired or discombobulated boy. If the ‘Tupac’ should settle upon something of interest, such as the oversized hanging butterfly in Milo’s room or a light-fitting of some kind, it can easily morph into a ‘Murali’ or even an ‘Inquisitor’. 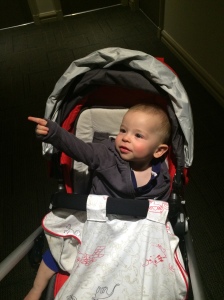 Oma came around early this morning to engage Milo in some Inquisitors as he watched the early morning planes come and go, so I was gifted an unexpected sleep-in and then a peaceful lunch.

In the afternoon Kuepps and I engaged Milo in a game of ‘Duplo Dueling’, essentially a block of Duplo is held in one’s mouth and then, using the force of pressurised air out of the cheeks, is jettisoned across the room. Milo is very fond of this game as these days a small cube of blue Duplo is challenging white plastic spoon and wooden peg for ‘object most regularly in Milo’s mouth’.

I was being thoroughly outperformed by my wife who was achieving significant distance and deserved giggling kudos from our son. My paltry efforts were achieving little more than a dribble out of my mouth, and a polite smile from Milo. So, on my final attempt I looked directly at my child, established a tight seal on the block and exhaled mightily. The block flew with pace out of my mouth and directly into Milo’s forehead, at quite some velocity. Milo was left with a small welt above his eyebrow and a furrowed, distrustful brow as he crawled away from me and into his mum’s lap for comfort. All I could do was apologise and concede defeat in the duel. Milo ignored me for 10 minutes.

The evening was peaceful and productive as Milo and I prepare for our big interstate adventure tomorrow. Our final week has begun.