Of all the contributions I make to this household, and to the Milo raising that goes on herein, the most valuable and unique is the consumption of surplus baby shampoo.

When Milo was born we were the fortunate recipients of a huge volume of ‘no more tears’ baby shampoo and it’s variants; pink liquids, white liquids, clear liquids, orange liquids. We approximate the total volume of this haul at around 8 – 10 litres; street value $120.

Of course Milo shortly after birth was quite bald, so for a long period our stockpile was entirely redundant. And even though we are currently considering cutting 8 hairs on each side that are swirling up and over his ears, Milo’s crop remains wispy and rarely in need of a good lathering.

At Milo’s current rate of consumption we have calculated our initial injection of shampoo will last 5.12 years; that is, we will run out some time during the afternoon of 27 November 2019. To compound this issue Kuepps attempted to purchase more baby moisturiser this week to satisfy Milo’s insatiable hunger for it, but unfortunately in her haste only managed to procure more shampoo. Frankly we don’t have the storage capacity to keep that volume of product on hand, we are sacrificing in other areas such as novelty Nespresso pods for when difficult/ discerning guests drop by.

That’s where I come in. As a dad I of course do not have any specialty body-wash requirements. If we had a surplus of baking soda in the house due to a “lamington-off” one weekend, that baking soda would be dissolved in water to form an abrasive paste which I would be asked to use as a personal cleanser.

So the family sized vats of baby-shampoo are lined up two-at-time in the shower and Kuepps makes regular comments about how grubby my meagre hair is looking, not asking but suggesting a shower might be a good idea. I pour this viscous, lightly fragranced liquid liberally all over my head, as if I were a Turducken basting itself. I lather, rinse, lather, rinse, lather and rinse until I am so fresh I no longer cast a reflection in the mirror. As I vanquish each bottle I toss it with satisfaction over the shower screen, letting it clatter away across the tiles. Kuepps is immediately on hand to soberly pass me another litre of pastel coloured soapy marinade without humour. I am going quite mad.

Yesterday was delightful weather for Family Fun Day, our last together during this chapter, so we loaded up and headed to the beach for Milo’s first taste of sand and surf. Here’s how we dressed him; tracksuit pants, long sleeve/ short-legged onesie, vest. Why we chose this combo I am not sure, but certainly the primary school equivalent of such a parental wardrobe mistake would have had far-reaching social consequences for our son. On this occasion however he suffered no obvious ill effects.

After an apprehensive 5 to 10 minute period in which he remained on the rug touching, massaging and tasting the strange medium encircling him, he was off. Milo spotted a confident group of Seagulls and crawled in a speedy but laboured fashion in their direction, improving his gait step by step as he got used to the sinking surface beneath him. Milo, not giving his parents a second thought, pursued these intriguing, hopping scoundrels for 20 minutes up and down the beach as they remained comfortably out of his reach. An enthusiastic gull would periodically leap up out of the pack and hover above Milo, squawking at this pursuer, more persistent than the T2000. Milo thought this was a wonderful spectacle and would pause briefly to point and giggle. Our adventurous child eventually grew tired of the hunt and clambered back to us, falling onto his mum exhausted, sandy and damp. 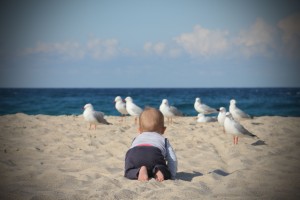 The following morning we were still removing sand from our son’s nose (despite using up some baby shampoo on him the previous evening) but after his morning nap we got ready and headed over to his Ama and Aba’s house for lunch.

Milo enjoyed the feast, particularly the asparagus which he tried for the first time, waving it around like a rubbery spear, slapping me in the face with it. After lunch Milo was very pleased with his ability to test and defeat the capacity of his nappy, forcing me into a full change and refresh.

Milo lay on his back, unusually compliant as I undressed him. I should have been suspicious but my overwhelming desire to believe my son’s good behaviour clouded my judgement.

Milo waited until he been entirely denuded and with a swift but precise swivel of his hips he was out of my grasp, on all fours, and darting toward the stairs, blabbering and giggling joyously. Milo then proceeded to climb five flights of stairs in the nude, darting and bouncing up each flight at a surprising pace, not unlike a dancing lemur. As he completed each flight Milo picked up his pace to motor across the landing and commence the next climb. When he had finally summited the last flight Milo sat triumphantly with a grand smile on his face and his arms stretched out toward me, permitting me to now carry him back down to where his fresh clothes awaited him.

On Friday night the planets aligned. Oma came to babysit Milo and some good friends of ours also managed to procure a baby sitter at short notice, thus allowing a rare adult meal to be enjoyed. Twenty minutes into the meal we noted that our only line of conversation had been our respective babies so we laid out an agenda to cover several other important topics, which we achieved, before quickly returning to tales of mayhem and mirth.