Thursday family fun-day was not so fun.

After the messy Wednesday night Milo and Kuepps were in no mood for swim school on Thursday morning, and the Sydney winter weather agreed. Instead we all limped out of bed, shared some dry toast and water and gazed glassily at the rain outside. Not even the cats could provide any entertainment. They were splayed languidly on the sofa asleep, piled on top of each other, clinging to a heat pack that had long since exhausted its warmth; pitiful to look upon. This is a home not in top form.

Milo was delighted to return to bed after a short while, at least having eaten a small amount of experimental Weetbix to see if his little tummy could handle it. Kuepps also returned to bed and I snuck out to once and for all resolve the internet issue (and to eat a secret Bacon and Egg roll – my immune system continues to battle, for now).

I returned to a whimpering boy, fastened to Kuepps’ side like the monkey in yesterday’s blog; in truth he could be either the pig or the monkey in that video. I peeled him off, tossed him in the car and we returned to Harvey Norman to exchange the golden router for something more simple (and appropriate) and then dashed home in time to give Kuepps the car to dash off to her physio appointment (routine hip relocation).

Milo was in reasonable spirits and joined me in celebrating internet connectivity by watching some NBA Summer League; particularly to view our new prospect, the Knicks controversial number 4 pick Kristaps Porzingis. Milo was impressed with his versatility but commented that he needs about ’30 pounds’ before the season starts in October. I am not sure why he doesn’t talk in metric weights.

At some point in the afternoon there was an incident with our Skoda, of which I will speak nothing further.

The evening continued with the same down-trodden mood as the morning; dry toast, water, oatmeal, self-loathing. Kuepps continued to feel very poorly and unfortunately had work to do so I lay with Milo from about 1900 until he fell asleep and then nipped him quickly into his cot, returning upstairs in time for the opening ball of the much anticipated Lords Test Match. This was all going beautifully until Milo made himself known to us at around 2030 and was clearly too upset to sleep alone.

So, together we pioneered a new model which may serve to revolutionise parenting (at least in the short term); I have set up a hastag #thisisparenting which you may freely use to record other such revolutions. I tucked Milo up in bed with me, turned off the lights and turned on the Ashes. Milo flopped around like he usually does but quite quickly settled down and fell asleep, leaving me to enjoy Smith and Rogers pummelling the hapless English. It seems the dulcet Lancashire commentary of David “Bumbles” Lloyd is even more effective than Milo’s white noise machine and he settled down to sleep the sleep of a thousand martyrs with minimal fuss. If only we can find a way for Channel Nine not to renew Shane Warne’s commentary contract I do believe we may have a winning formula into the future (at least for the next month); Warney’s unpredictable hoots and yelps startled Milo on several occasions.

Milo slept peacefully until about 0200 and then unfortunately woke up feeling ill again which precipitated another load of washing and a late night shower with dad, which he did not appreciate.

By Friday morning we were a tired household and Kuepps was in no shape to go to work so she set herself up in the spare room (to avoid the limpet) and continued to earn the bacon. Opa arrived around 1000 so I could take the poor Skoda to the smash repairer (again, I will say nothing further) and took care of Milo for an hour or two. Upon my return we spent the rest of the afternoon staying warm and snuggling with the cats while mum hid just behind the wall. 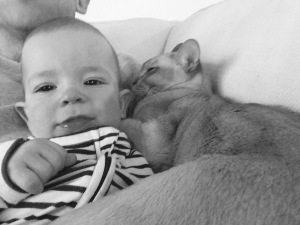 Huckleberry doing his bit for the recovery

Let us hope the weekend brings comfort and recovery, and Monday a new week with a recovered Milo.