This morning we executed our first ‘Raiders of the Lost Ark’ style parent transfer, an important development.

As is usually the case these days Kuepps ended up sleeping in the spare bed with Milo for most of the night. I received a text from her around 0630 to tell me he was still asleep so I snuck in and as Kuepps slipped out of the bed, I slipped in. Milo murmured but remained asleep. Kuepps and I gave each other a fist bump and Kuepps headed off to work.

Milo continued to nap until about 0730 at which time we both sprung up and both ploughed into some Weetbix. Milo seemed surprisingly interested in Elefun this morning, and has figured out that red button equals cacophony. The heady mix of elephant trumpeting, carnival music and children repeatedly saying ‘yeah’ is now more to his liking so the red button is pressed regularly. The cacophony now usually inspires Milo to execute his hip thrusting, karate chopping dance style with great enthusiasm. The Elefun dance party tired Milo out and by about 0930 he was back in bed where he remained peacefully until just before 1100.

We then loaded into the car and headed into town for coffee with some colleagues at which time I confirmed I will be able to return to work 4 days a week when this adventure comes to an end at the beginning of September; terrific long Milo weekends in our future.

We dashed home, Milo with a ravenous look in his eye. I tossed some roast vegetables at him to placate the feverish hunger while I cooked him a patented Milo omelette, which involves grating whatever vegetables are in the crisper, mixing with egg and whacking the dense mixture into the frypan. With my growing omelette confidence the product has become increasingly esoteric, more like green scrambled eggs reformed into an omelette shape; perhaps an egg version of the weird German dumpling dish Kartoffelkloesse; essentially potatoes mashed and then reformed into potatoes. Rather inefficient for Germans. 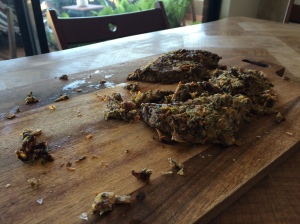 Milo grows better at throwing food by the day, his most recent achievement is the ability to toss food backwards over his head. You may note from the above photograph substantial morsels resting on top of his head; the result of this newly developing skill.

After the omelette party Milo was liberally coated in a thin film of egg and vegetables. Instead of dealing with this in any serious way I turned up the heating and let Milo cut around nude for the rest of the afternoon (nappy of course). Milo, being at least 50% German, loved this freedom.

During the afternoon we developed a new use for his activity centre which once contained him for up to 20 precious minutes at a time, but is now viewed with great distrust as an instrument that seeks to curtail his freedoms. Milo stood up on the outside of the activity centre, gripping its rim tightly while bouncing up and down in his usual way. I then procured all of the ball and ball-type objects I could find (Elefun balls, tennis balls, squishy balls, the spiky plastic things that go in the dryer to improve efficiency) and then lobbed them one by one at the seat in the middle of the activity centre which worked nicely as a basketball rim. Those balls that missed and remained on the rim were quickly scooped up and deposited into the hoop by my rim cleaner Milo, who put in a Dennis Rodman calibre performance.

This game entertained us long into the afternoon and soon mum was home. We all chatted and played and cooked into the evening but unfortunately just before dinner Milo threw up, and then a couple more times after that; we think he has his first bug of some kind. It soon became apparent that Kuepps was also unwell, a lurgy has descended upon our household.

The whole family had a very unsettled night with the poor little man laid low; a horrible mix of stomach ache, thirst, hunger, tiredness and confusion. Being the innocent first time parents that we are we called the NSW Health Direct line to describe Milo’s symptoms. Of course there was little they could tell us except give him little sips of water and monitor him for any signs of worsening, which we will do and hope his skinny little ribs don’t get any skinnier.