Kuepps, Milo and I loaded up the bicycles and cruised our way to the pool. With an extra set of hands, disrobing and robing the slippery noodle was vastly more straightforward and before we knew it Milo was splashing away happily and grinning at mum who was watching from afar. The senior member of the group Lennox was a bit ropy today and looked much less Ogre in the ‘Trojan Horse’ event than last week. However the new benchmark was a first timer named Liam who arrived this week looking very smug.

When it came time for dunking Milo performed 15% better than last week; still shrieking and looking at me with disdain, but with less fury, and with less vigorous attempts to scale me and perch on my head. When it came time for Liam’s turn his mum gave ‘the secret command’ (as she put it) “OK, ready Leo, go” and the 8 month old child closed his eyes, took a deep breath and executed a perfect dive under the water, emerging with a wry smile and I am pretty sure a wink at the instructor. Lennox’s dad and I exchanged shamed glances as our children, looking like cats rescued from the washing machine, yelled at each other and clawed away at our faces.

Soon the class was over and with mum’s extra hands Milo was much happier in the shower and we dried and dressed him with relative ease (ie. he did not escape and crawl like a half-nude lunatic, panting and bellowing toward the exit).

Unfortunately Milo snoozed again in the Croozer on the way home which discombobulated him for the rest of the day, resulting in significant grief for poor Oma who covered for Milo’s gallivanting parents during the evening shift.

So, as per last week, a difficult Thursday evening and night lead to a very peaceful Friday. Milo and I explored plans to convert his little balcony into a ‘sensory garden’ (ie. astro turf and pigeon netting to stop him launching his German books over the edge) and then had a long lunch of Omelette and cucumber together as the fibre internet installers did their work. One of these technicians, a young man from Sunderland, was rather smitten with Milo, said that he was off to South America over Christmas to meet his ‘special one’ and that Milo’s mother must be an “attractive lass” (the very definition of a back handed compliment for me).

In the afternoon Milo and I watched our first episode of the IT Crowd together. Milo enjoyed this very much, hooting and bouncing throughout; it would appear his favourite character thus far is Moss. 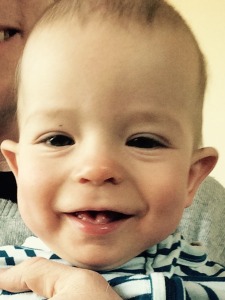 I would also like to record two areas of fathering efficiency I have implemented around the house.

Firstly, toe nails. Milo’s finger/ toe nail situation is one of those areas in which I don’t excel. In relation to this subject I have in the past made one of those very foolish parenting comments that only amateurs make like “geez he hasn’t done a poo all day” (when in fact he has done three and I have just highlighted the fact I have just not been involved in any of them). On this subject I commented to Kuepps that it was interesting how slowly Milo’s nails grow (no, of course Kuepps has been cutting his finger nails regularly). Kuepps, quite reasonably, drew a line in the sand and said she would no longer be clipping his toe nails and that unless I wanted a clawed child who would bring shame upon the family at Gymbaroo and Swim School I would need to take over. I sheepishly agreed to this but then did not immediately take any steps to discharge my duties.

One evening this week Kuepps complimented me on finally clipping Milo’s toe nails, which looked terrific. I briefly considered taking this compliment but then thought better of it, conceding I was not responsible. We then presumed Oma was the one who had taken to his claws but quickly confirmed this was not the case. A little baffled we considered other plausible options; somebody, perhaps our strata manager who may have a key to our apartment snuck in during the night and clipped our child’s nails before silently departing as a gesture of good will for paying our strata fees on time? Perhaps the cats, finally accepting Milo as one of their own had groomed him? Eventually we concluded that Milo had in fact ground his toenails down in a free-range fashion due to an increased frequency of crawling correctly on all fours and a greater proportion of the day spent in bare feet. Miraculous fathering efficiency.

Secondly, bottle teat flow-rate. In an effort to thoroughly rinse and wash Milo’s formula bottle this morning I took to the teat with a bottle brush, a little too aggressively as it turned out, ripping a hole in the end of the nipple. Without an alternative we just persisted with the equipment available to us. So, after Milo’s afternoon sleep I offered him this new bottle, modified for speed. Milo did not hesitate and aggressively took to the bottle which delivered the formula at almost gravitational speed. Milo coughed and spluttered, and although a little more milk than usual ended up on his neck, he powered through the bottle in record time, an efficiency of at least 45 seconds over our previous personal best. Again, an admirable efficiency dividend that would make any austere government proud.

On Friday night we braved the highway to Canberra, Milo’s first taste of fiendish Canberra winter.